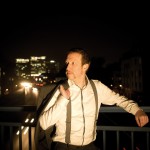 HENK REISEN stands for handmade electronic music from Essen, Germany. Henk, who is mastermind as well as footboy of the 2006 founded project, employs musical variations of electronica, downtempo, electro funk, dub techno and chill out to fulfill his artistic visions.

In terms of composition he cold-shoulders longer external samples or other preshaped pieces of sound. Instead he devotes his efforts to what making music is really about: creating rhythms and tunes, sounds and structures with the pure intent to express feelings and thoughts. It’s that simple.

Henk has been playing and composing solitary or with different bands for his lifetime. He has been creating commissionary compositions for theatre plays, contemporary dance pieces, radio features, television broadcasts or web pages. During his breaks from composing and producing he manages orchestral and chamber music concerts and plays Rock’n’Roll piano with one of Germany’s best Elvis Presley tribute bands and is the organist of a very fine Punk’n’Mod band.

„Should someone merge the movies »DRIVE« and »TRON« into one, it’s on HENK REISEN to produce the soundtrack.“
ARTE CREATIVE | september 2014 | official twitter account

„Aside from the clubs HENK REISEN is working on the most beautiful song in the world. The new EP-album »CHANGES« features seven musical pearls in the fields of downtempo, synth-pop, lounge-jazz and folktronica, which are traversed by nostalgic organs and nonchalant drums. Resistance is futile.“
BEAT magazine | febuary 2012 | print

We use cookies to ensure that we give you the best experience on our website. If you continue without changing your settings, we'll assume that you are happy to receive all cookies on this website. Please, don't use this service if you do not want to recieve any cookies. OK No